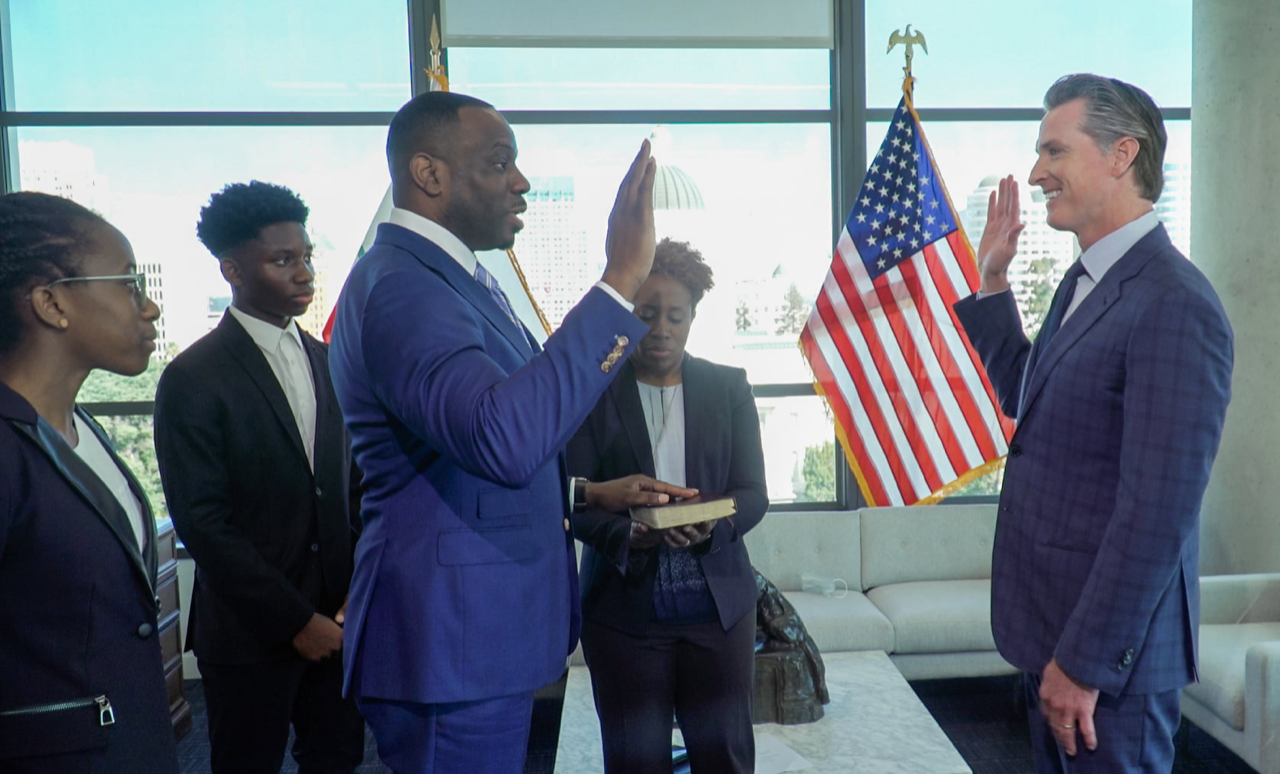 Omishakin, 44, is making history as the first African American to hold the cabinet-level position overseeing all state agencies that regulate and support transportation and administer services related to the sector.

“@CAgovernor would like to express our gratitude for the new appointment to Cabinet Secretary @CA_Trans_Agency,” Omishaken thanked in a post on Twitter after his appointment was announced in February.

“Looking forward to continued #partnership and achieving a shared vision to implement #Equity #Climate #Safety initiatives for CA’s transportation system, now and in the future. to come up. #CAForAll,” Omishakin’s tweet continued.

In the California state government chain of command, Omishakin’s role as secretary is a step up from his last role as director of the California Department of Transportation (CalTrans).

Governor Newsom named him head of CalTrans in September 2019.

Earlier this month, Omishakin’s wife and two children joined him as he was sworn in in Sacramento to begin serving in the governor’s cabinet.

During the swearing-in ceremony, Governor Newsom said Omishakin brings experience and vision to the role.

“As the leader of the nation’s largest and most complex transportation system, I’m confident he will continue to provide his forward-thinking leadership and dedication to serving the people of California,” Newsom said. “(Omishakin) will advance our ongoing work to build safer, healthier and more sustainable communities that serve all Californians.

“A veteran of state service, Director Tong’s deep experience in the public sector and his leadership in technology have helped guide key efforts to make government more effective and efficient, including our work to bridge the digital divide and help state agencies address complex challenges during the pandemic,” Newsom said, highlighting Tong’s past accomplishments.

In his role as Secretary of CalSTA, Omishakin will oversee Caltrans, the Department of Motor Vehicles, the California Highway Patrol, the High-Speed ​​Rail Authority, among other transportation-focused agencies and committees.

He assumed the role after President Joe Biden signed a $1.2 trillion federal infrastructure bill into law last year. The legislation will direct billions of dollars to the state for wildfire preparedness, public transit projects, bridge and road repairs and broadband internet.

California will receive $25 billion from the federal government for highways under the Reconnecting Communities initiative. The program was created to undo some of the effects of economic and social disruption caused by the construction of highways in a number of predominantly black communities under the Federal Aid Highway Act of 1956.

The U.S. Department of Transportation estimates that between 1957 and 1977, nearly 480,000 households across the country were forced from their homes to accommodate highway construction, which began under the president’s administration. Dwight D. Eisenhower. Some of these highway projects have entrenched segregation by isolating some of these majority black communities and cutting off their access to resources.

In an April 2021 interview with California Black Media, Omishakin said CalTrans needs to “engage more” with black and brown communities.

“We need to reach out more to people and businesses to let them know what opportunities exist,” he said.

The position of Secretary of Transportation for the State of California requires Senate confirmation and the compensation is $227,178 per year.

Omishakin, born in Knoxville, Tennessee, is registered with no political party preference.

Omishakin earned a Master of Arts in Urban and Regional Planning from Jackson State University, a historic black university and college (HBCU) in Mississippi. He is completing a doctorate in engineering management at the University of Tennessee.

From 2011 to 2019, Omishakin served as Deputy Commissioner of Environment and Planning at the Tennessee Department of Transportation.

In August 2020, Omishakin opened the CalTrans Office of Race and Equity (CORE), which works closely with the Civil Rights Office to combine equity initiatives. The office is hosting a virtual business summit to support small business owners.

“Omishakin has implemented innovative strategies to create a more equitable world-class transportation system for all users while improving the safety and livability of neighborhoods across the state. Under his leadership, Caltrans worked to accelerate more than 100 highway projects during the pandemic, adjusted operations to help keep goods flowing despite supply chain challenges, and led the transformative Clean California program that revitalizes spaces. audiences across California,” Newsom said.

CBM exists to facilitate communication between the black community, the media, grassroots organizations and policy makers by providing factual reports to a network of more than 21 black media outlets on major public policy issues.