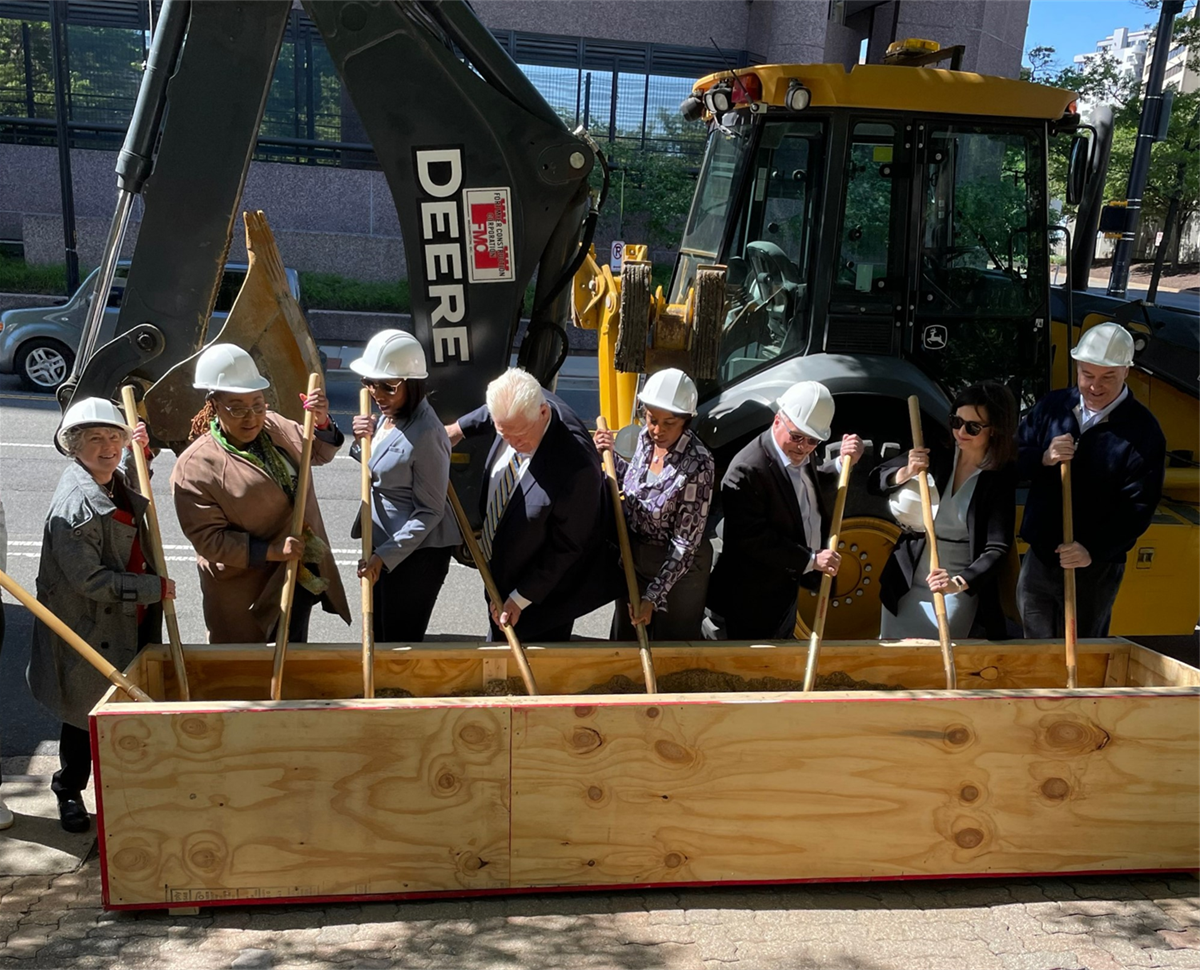 A more dedicated bus service arrives at Pentagon City. Today, Arlington County officials and representatives from state and regional transit agencies broke ground on the site of the future bus terminal at 201 12th Street South to mark the first phase of the Transitway expansion project. .

The Transitway Extension will improve transportation needs in the Crystal City-Potomac Yard corridor in the National Landing area by adding seven new transit stations as well as additional dedicated bus lanes. These additions will improve connections to the Washington Metropolitan Area Transit Authority (WMATA) and Columbia Pike Metrorail stations and support planned residential and commercial developments at Pentagon City, Crystal City and Potomac Yard in the city of Alexandria.

The Transitway Extension is primarily funded through a partnership with the Northern Virginia Transportation Authority (NVTA) and the Virginia Department of Rail and Public Transportation (DRPT).

“This extension of the Transitway is critical as it will support an increase in demand and regional travel needs as Pentagon City and Crystal City continue to thrive with the arrival of new businesses such as Amazon Headquarters 2 and the Virginia Tech’s innovation campus in Alexandria, attracting commuters and visitors from across the region,” said Katie Cristol, Arlington County Board Chair and NVTA Board Member.

“Having multiple, reliable ways to get around the region is critical to realizing the county’s plans for an 18-hour city in Pentagon City and Crystal City, with a dynamic range of places to live, play and work, all easily accessible by public transport” Cristol added.

This extension adds 1.1 miles to the 4.5 mile corridor that currently connects Crystal City and Braddock Road Metrorail stations, which has been in service since 2016. WMATA will operate the bus service lines once the extension is complete.

“Once complete, this multimodal connection and Pentagon City’s transit expansion will serve as a connection and enhancement to Metrorail and economic activity throughout the region,” said Phyllis J. Randall, President of the NVTA and the Loudoun County Board of Supervisors.

“NVTA has contributed a total of $227 million in transportation projects to National Landing, including nearly $29 million in total investments in this Pentagon city alone and multimodal connections and the Transitway expansion, an investment for the region,” added Randall.

When complete, the Transitway Extension will directly benefit approximately 23,000 existing and planned residential units as well as 24.9 million square feet of existing and planned commercial space within one block of bus routes and dedicated stations. ‘by 2045. Residents and commuters can also expect improvements. at traffic lights and pedestrians in addition to infrastructure that supports people with disabilities.

Construction of the first phase of the Transitway Extension will take place in three segments. The first segment will install two new transit stations at Crystal Drive and 15th Street South and at 12th Street South and Long Bridge Drive, in addition to making street improvements along 12th Street South between South Eads and South Clark. Existing on-street parking on this road will become a dedicated bus lane as part of the project. The first segment is expected to be completed in the spring of 2023.

Working hours will be Monday to Friday from 9am to 4pm. Here, residents and commuters can also sign up for Crystal City-Pentagon City transportation updates to receive news about this and other projects in the area.