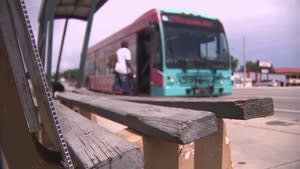 The Orange County Board of Commissioners will vote Tuesday on whether to include a proposed sales tax increase on the November ballot.

If approved, the hundreds of millions of dollars raised could help pay for everything from road improvements to Lynx and SunRail extensions.

To help determine what the county’s transportation priorities should be, Mayor Jerry Demings launched an online survey to solicit feedback from Orange County residents.

A similar survey in 2019 received nearly 11,000 responses before the COVID-19 pandemic suspended all transportation efforts.

Orange County residents and travelers who frequent the area were invited to participate in the 2022 version of the survey, which received nearly 8,500 more total responses.

According to Data released Monday by the county, 93% of respondents said they use a car as their primary source of transportation.

79% of participants said congestion was the biggest transportation issue in Orange County.

When it comes to top transport priorities, 57% said they thought “building public transport” was most important, while 48% said it was “improving synchronization of traffic lights”.

Overall, a majority of respondents – 33% – said they were not at all satisfied with Orange County’s current transportation system. Only 3% said they were completely satisfied.

At least four commissioners must vote “yes” on Tuesday for the Transportation Sales Tax Referendum to be included in the November ballot.

To watch a live stream of the meeting online, Click here.

To view the full results of the 2022 transport survey, Click here.

the survey will remain open for participation until 11:59 p.m. Monday.

The 3 Best Installment Loan Apps to Get You Started