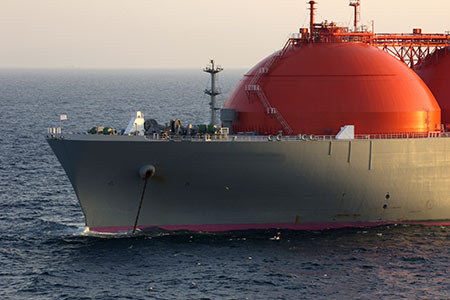 Argent Marine Management has licensed its patented technology for the transport of LNG by sea in ISO containers. The license is granted to a subsidiary of New Fortress Energy for the loading, transportation and delivery of ISO containers filled with LNG to locations in the Caribbean and the territorial waters of the United States, Mexico and Canada.

Argent Marine’s patented technology involves the use of a proprietary manifold and control system on board a ship that interconnects multiple ISO containers allowing the filling of all containers on board in a single operation, from a land or floating LNG source such as a liquefaction plant or LNG storage tank. The manifold also allows control of boiling in individual ISO containers on board the vessel, facilitating delivery over long distances. Once loaded, individual ISO containers can be transported by ship to multiple ports and then unloaded onto trucks for further small-scale LNG land distribution. The handling and transport system facilitates the distribution by ship of small quantities of LNG to multiple consumption locations, minimizing otherwise large handling costs and thus improving the overall transport economics for small-scale LNG distribution. For example, the system will facilitate the distribution of LNG from US aquatic facilities or other LNG facilities to the many small island power generation facilities in the Caribbean, Mediterranean or other archipelagos.

The technology also allows the unloading of LNG from multiple ISO containers similar to a single on-board tank. This functionality forms the basis of Argent Marine’s proprietary Intermodal Bunkering Vessel (IBV), which facilitates low-cost bunkering of LNG at any port seeking to supply LNG. For ports without an on-site LNG supply, operations involve the trucking of ISO containers filled with LNG from an off-site source to a port location where, under current regulations, the containers are loaded onto the port. IBV and connected to the collector. Once loaded with several filled ISO tanks, the IBV moves alongside an LNG fueled vessel and unloads LNG from the ISO tanks through the manifold similar to conventional oil bunkering operations. Empty containers are then unloaded and replaced with full containers for the next bunkering operation. The system facilitates the immediate start of bunkering operations as it does not require the installation in the port of LNG production and / or storage infrastructure, thus avoiding the time, costs and authorizations necessary to support the operations of bunkering of conventional LNG. For ports with on-site supply, multiple ISO tanks on board the IBV can be filled simultaneously from the local storage tank. Argent Marine’s proprietary IBV system is the most similar system to conventional oil bunkering and, due to its lower capital and operating costs, provides superior bunkering economy.

It is important to note that due to recent efforts relating to the decarbonization of the maritime sector, the IBV and the bunkering system have been adapted to transport other alternative liquid fuels including ammonia, methanol and liquid hydrogen.

Read the article online at: https://www.lngindustry.com/liquid-natural-gas/23042021/amm-licenses-lng-transportation-technology/

Qatar Petroleum has entered into a long-term sale and purchase agreement with CNOOC.

Transportation, technology among biggest barriers between Cincinnati seniors and vaccination